Listening to LOVE NOTES is as if I had coffee with an old soul named Love and he shared his thoughts with me before beginning his day. Giving listeners a beautiful range of vocals in the form of sophisticated soul, Recording Artist Sam Trump delivers again. Calvin Valentine’s delivers excellent production, allowing the listener to enjoy the sensual instrumentation, while highlighting Sam Trump’s versatility on the trumpet. The feeling of fondness for that special someone is wrapped into LOVE NOTES, the perfect gift, especially on Valentine’s Day. 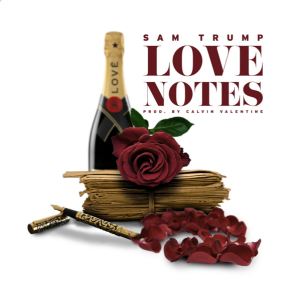 In 2016, I attended a video premier series that featured work by Sam Trump who is currently based in Chicago, Illinois. His energy struck a chord with me when I first watched the video for his hit single ‘BROTHER’. I had the pleasure of catching up with the Creative days before the release of the project LOVE NOTES. As you download and listen to LOVE NOTES, enjoy my conversation with Sam, aka Mr. Love Note.

GK: I appreciate you taking a moment out of your hectic schedule to catch up. Let’s get into it! How would you like to be classified?

GK: Where are you from?

GK: What Art/Music School did you attend (if any)?

GK: How many music projects have you released?

GK: Name at least 3 artists that you have collaborated on songs |music projects with?

ST: My band Sidewalk Chalk has been touring throughout North America for the last three years. We are about to release our fourth album.

GK: I loved seeing Sidewalk Chalk perform at AFROPUNK Brooklyn a few years ago. Speaking of… New York is an epic city to perform in as a Recording Artist. What venues in NYC have you headlined at or do you headline at?

GK: What venue in NYC would you like to headline at?

GK: When in The City, have you ever performed on public trains/platforms?

Please note: I, Gayima, predict that Sam Trump will perform in a NYC platform before the end of 2017. My two cents.

GK: What city was the most disappointing and why?

ST: Once Sidewalk Chalk visited Tulsa, OK and there were four people in the audience. Four. The room was a decent size, too. It was disappointing to travel all day from the previous city to perform for an empty venue! Before the show, the band agreed to go full out despite the lack of people, and we had a whole lot of fun. Those four people were turnt too!

I love that Sam Trump and his band made lemonade out of lemons. Don’t you?

GK: Are you a Dog or Cat person?

ST: I’m cool with either and I have no preference. I’d actually prefer to the be the one petted often, but in the form of a massage lol.

GK: What is the last city that you couch-surfed in and why?

GK: As we approach your release date for your new project, which “happens” to be Valentine’s Day, what’s your take on marriage? Polygamy or Monogamy?

ST: I’m naturally drawn to monogamy when in a relationship, and I believe in marriage. That’s just my take on it, my preference.

GK: Do you think your career and marriage simultaneously is possible?

ST: Yes, anything is possible with strong will, and favor.

GK: Who do you think you were in a past life?

ST: I think that life is now. I am Sam Trump.

GK: Since music is your life, what do you do to have fun | unwind?

ST: Well, life is already fun because I’m doing what I love, however I do like to check out artistic events around Chicago and gain inspiration from others. I like to hang out with folks in a chill atmosphere and converse/interact. There are some folks I like to hang with in a group setting, and there are others that I enjoy one on one. Some of the one on one convos evolve into brainstorming sessions where we end up collaborating on an idea. That’s how #productionCOLORS and #ChiBrations formed – I am the co-founder of both of these new, Chicago-based organizations.

GK: Have you travelled to a city for your craft that you would pick up and move to in a heartbeat?

ST: Detroit shows me MAD LOVE! I don’t think I would necessarily pick up and move there though because Chicago is where I’ve been building, and things are just starting to pick up. Besides, when I’m only in town for one big show, people come out, and that strategy is important when establishing a buzz within another city’s scene – creating a demand for your presence. Bigs ups to Darnell Kendricks for bringing me out there!

GK: Where do you foresee your music endeavors within the next 6 months?

ST: Wow, I don’t know. Anything’s possible at this moment with the many irons I have in the fire. Sidewalk Chalk is planning to tour sometime this year when our fourth album drops, so I’m sure within the next six months we will be on the road somewhere performing the new ish! I can only guarantee that within that timeframe, there will be more music created, and that I will improve at executing my art and establishing my brand because I do this daily.

GK: What do you think defines an Indie Artist?

ST: I would say that an Indie Artist is one who, along with writing and recording music, carries out label duties to further establish the artist’s brand and presence on a given scene. An Indie Artist does many or all of these things: promotion, design, booking, branding, band operations, finances, publicity, managing.

GK: Do you believe that you have maximized the potential to earn income from your art?

ST: No, I think there is a lot of room to maximize my earning potential from my art. Recently, a fan took me under his wing to offer up advice on writing business plans for my ideas and get funding to support them. This is the first step towards increasing my earning potential.

GK:  Thank you for your energy.  I imagine LOVE NOTES will strike a chord in many.

Now available for streaming and download on iTunes & Bandcamp.

Published by I Am Gayima.